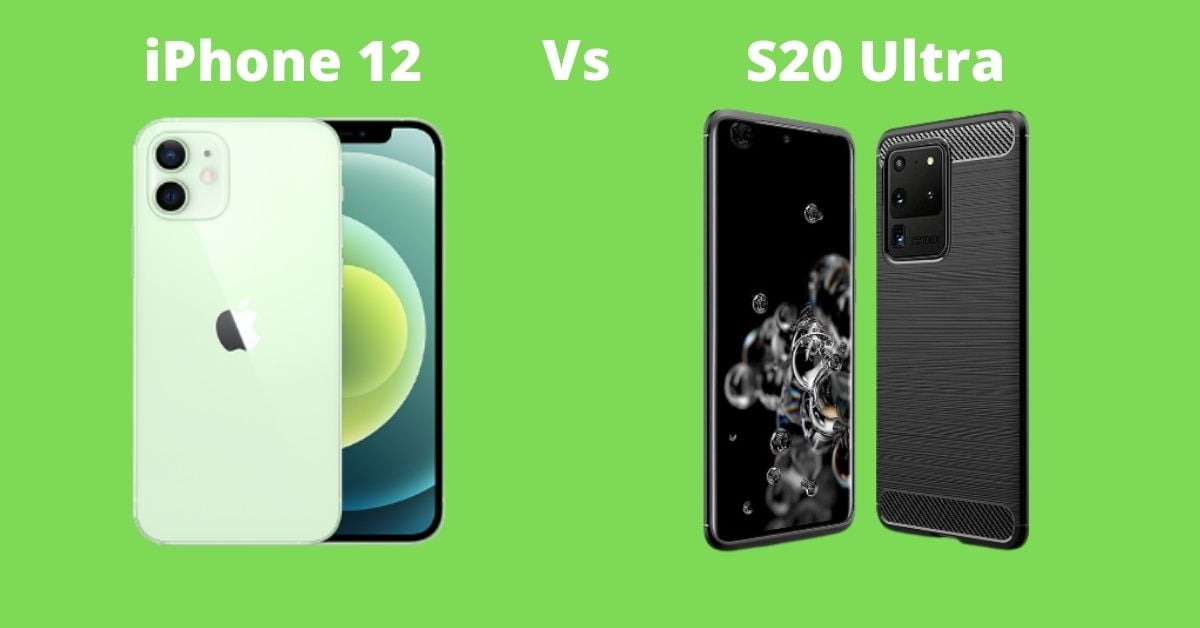 The Apple iPhone 12 and Samsung S20 ultra have been rivals ever since they got launched this year. Currently their company’s greatest phones, the two are in a tough competition against each other for all the good reasons. Not only are they top notch quality, but each has unique features that makes it stand out in the market. It is about time that we put them side by side and decide once and for all, which phone is the better one.

Quite similar in size and shape, the two phones are very visually appealing. The Galaxy S20 ultra is 6.9 inches long, while the iPhone 12 is only 6.2 inches. Both phones with curved edges, the iPhone 12 has a flat-edge design unlike the Galaxy s20 which has a curved display.

The iPhone is also available in 5 different colours – black, white, gray, green and blue, while the Galaxy s20 ultra is available in cosmic grey and cosmic black. The two phones are also made up of aluminum and are water resistant for up to half an hour in 4.9 meters of water. Compared to the brightness level of 569 nits of the iPhone, the Samsung s20 is clearly the winner with a remarkable 857 nits.

While the Samsung Galaxy s20 ultra has a depth vision camera with a 12-megapixel-ultrawide angle along with 100x zoom, the iPhone 12 has a better auto-focus and an automatic night mode, bringing attention to every single detail in the photo.

The iPhone features a dual 12MP back camera and a 12MP selfie camera while the S20 has a 12MP sensor along with an admirable 64 MP telephoto camera. It is safe to say that both the phones have exceptional camera quality and are great to be used for taking pictures.

Both the phones have a remarkably high-performance rate. Each phone features its company’s best chipset technology – the iPhone 12 with the A14 Bionic chip and the Galaxy s20 with the Snapdragon 865. They both support 5G network as well as 4G LTE networks. The S20 has a remarkable512 GB storage while the iPhone 12 has a 256 GB storage.

Declaring one phone as the winner from the two is close to impossible. However, if you are looking for a less expensive one, the iPhone 12 is your go-to as it is priced at $799 as compared to the Galaxy S20 which is $999. With unique features and extraordinary performance rates, the two phones are currently the best of their kind in the market and are highly sought-out by most individuals.