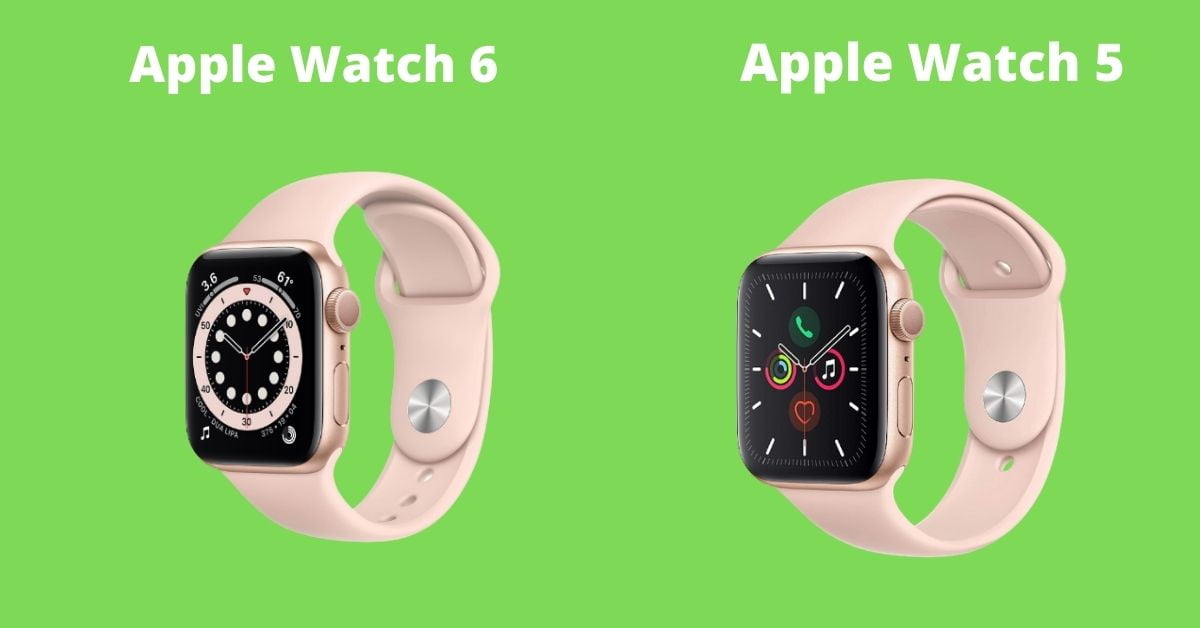 The Apple Watch 5 and Apple Watch 6 have a few similarities which set them apart from other products of their type. With a Retina LTPO OLED display, they each have a 64-bit dual core processor and a W3 wireless chip. They both feature an electrical heartbeat sensor and are water resistant up to 50 meters. The most special thing about these two watches is that they have a 50 percent louder speaker, a fitted mic and can last you the entire day without charging, i.e., they have an 18-hour battery life.

They both come in 40mm and 44mm sizes and are extremely fashionable and portable – perfect for outdoor-wear. The Apple Watch 5 and Apple Watch 6 can also detect noise and have a built-in GPS to help you on your journey. Clearly, these sensational smart watches are way ahead of their time. They not only make your everyday life easier, but also fun and exciting.

Moving on to what sets the Apple Watch 5 and Apple Watch 6 apart from each other, the main feature is the always-on display of the Series 6 which is 2.5 times brighter than the Series 5 when you are outdoors. Secondly, the S6 processors in the Apple watch 6 are much faster than the S5 ones in Apple Watch 5. However, as said by the famous company itself, the S5 processors still offer an “incredibly fast performance”.

Since the Apple Watch 6 is an upgraded product, it features the U1 Ultra-Wideband chip which enables short range wireless locations with a higher accuracy than what Bluetooth and Wifi offer. Speaking of Wifi, the Series 5 has a 2.4GHz frequency, while the Series 6 also supports a 5GHz frequency which is faster and more effective.

The Series 6 also has an always-on altimeter as opposed to the Series 5’s barometric altimeter, along with an improved battery life and faster charging. The Series 6 also features a blood oxygen sensor which is a never seen before health monitoring feature of the Apple Watch. It keeps you well-informed about the oxygen saturation level in your blood, and how well it is being distributed in your entire body.

To conclude, the Apple Watch 5 and Apple Watch 6 sport unique and special features along with some similarities that mark them as the ultimate Apple products. Priced at $329 and $499 respectively, the Series 5 and Series 6 are highly sought-out by numerous individuals who lead busy lives and are looking for high-functioning and good quality products. We highly recommend these high-end products and ensure that they will make daily life easier for you.